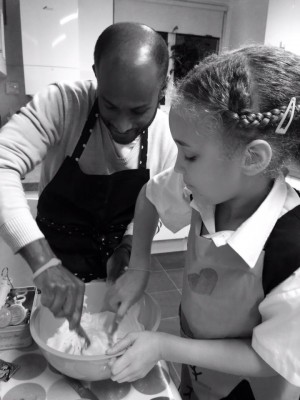 If this fails to make you smile and cheer up a rather chilly Monday morning then we don’t know what will! 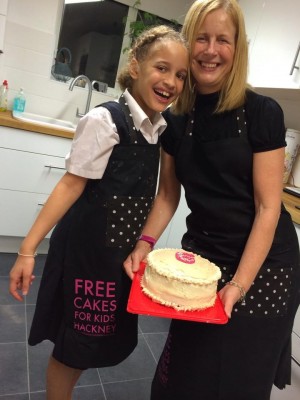 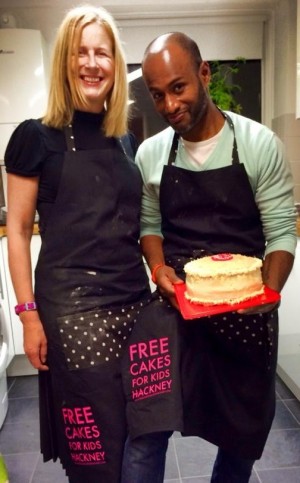 It’s got it all … happy bakers (wearing stunning aprons we might add!), getting together to do a group bake, resulting in a simply schmazing six cake. Happy bakers, happy recipient, happy us.

Thank you to FCFK Hackney bakers Shelly, Gail and Kitty-May for sharing your fun group bake with us. We {heart} you and we hope to get an invite round yours next time the mixing bowls come out!

We’ve been a bit slow off the mark this year but, still, we don’t think it’s too late to wish you a happy 2014. Fourteen days in, hey?! How’s it been so far? For us … not too shabby actually!

On Saturday we had our FCFK Hackney committee “away day,” which didn’t actually take place away and didn’t last a day, but we’re not going to nit-pick! Apart from stuffing our faces with amazing Ottolenghi-inspired hazelnut and white chocolate brownies (what January detox?!), we came up with some great plans for the coming year. We’ve already got a baking workshop taking place this week at Ann Tayler Children’s Centre, but we’ll be putting in some grant applications to hopefully get us the funding to enable us to do more, and we have some very exciting ideas for another cake decorating event and a monster fundraising extravaganza. We will reveal more as soon as we can but let’s just say that a cafe takeover may be on the cards. Eeee! 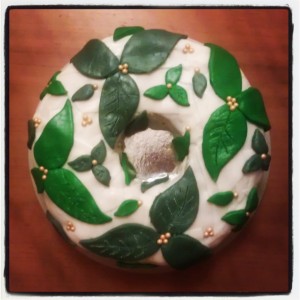 While some of us were running around doing last minute shopping, wrapping and last minute last minuting, a few bakers stepped in to make some cakes for a children’s centre’s Christmas party, including this, frankly beautiful, wreath cake, as well as a cake for a child who had her birthday on Christmas Eve. It would have been so easy for that child to have been overlooked but, as you’ll see in our forthcoming Cake of the Month feature, that most certainly did not happen.

The referrals have been a bit thin on the ground so far this year but we have a strong army of bakers with wooden spoons at the ready just waiting to tackle any cake request thrown at us, so if you work with children or families and know of people who could benefit from our service then please do get in touch.  The more cake referrals the merrier, as they say.

We’ll leave you to get on with your second Tuesday of 2014 shortly, but firstly, three quick links:

One: Did you know that if you donate £10 to us through Local Giving then that tenner will be matched so we get £20 instead of just £10?  Pretty awesome, yes?  The pot of money is running out though so you only have until 28th February to double your donations to us if you’d like to.

Two: Remember we mentioned that we now have aprons that you can buy?  Well those aprons were expertly printed by the lovely guys at Print Club London and they’ve gone one step closer to ultimate loveliness and written about us on their website.  (Thanks again guys!)

And three: Can’t get enough of us?  We’ll soon be sending out our quarterly newsletter.  If you aren’t signed up to receive it then why the hell not?!  Sign up now … pleeease!

Christmas, it’s a time for giving. If you’re feeling generous and are in the market for a little bit of festive shopping then we have got a humdinger of a present portfolio for you. So fasten your seat belts and let the goods unveil themselves before your eyes.

First up, the pinny, or A-mazing apron of awesomeness:
Made from the real deal black cotton twill, our generously-sized aprons feature our FCFK Hackney logo in hot pink in the bottom right corner (not too in-your-face but you’d still stand out in a crowd of Mary Berry wannabes). And if that wasn’t enough, the polka dot pocket, neck band and waist tie are sure to have you swooning. These ain’t no mass-produced pinnies, we’ll have you know. Each one was made lovingly by hand (by a member of our FCFK Hackney committee no less) and with a batch of just 20 in existence, they truly are limited edition. If you’re serious about keeping the icing sugar off your clothes, but always need to be a cut above the rest, then this is the apron for you.
A snip at just £15.

Thank you to baker Shelly for modeling our apron and for being an all-round good sport!

Bringing up the rear, but no less great, the t-t-t-totally top tote bag:
What can we say? Totes are everywhere. Every man and his dog has their logo on a tote and they’re all vying for space on your arm, but ours are different. Well, not so different really – they’re the same standard cream fabric tote, universal in their usefulness, but ours are emblazoned with our FCFK Hackney logo, again in hot pink, and that is most definitely different. Different enough to have Strictly’s Richard Arnold getting his mitts on one, anyway! If you want to turn heads when out buying your groceries* then you know what to do: buy, buy, buy! (*Our totes are in no way limited to carrying groceries. They have been known to be used for swimming kits and even a knitting bag. What do you use yours for?)
A bargainous bargain at a measly £5.

Email us at hello@freecakesforkidshackney.co.uk if you would like to purchase either an apron or tote bag.

All profits made from both products go back into extending the work we do at the heart of Free Cakes for Kids Hackney.

We like to think of ourselves as trendsetters here at FCFK Hackney. Back in the summer we blew all other bags out of the water with our totally fantastic tote bag, which sported our logo in hot, hot pink. Even Richard Arnold wanted to wear one on his arm!

But we didn’t want to stop there, oh no! So we came up with what all self-respecting bakers want to dress themselves in – a super stylish pinny of course!

We’re fortunate enough to have a tailor on our committee (hi Laura!). She very kindly has given up her time to create 20 bespoke, hand crafted, limited edition aprons for us (thank you Laura!). Needless to say, we are ridiculously excited and can’t wait to try one on for size. Can you?!

There are only 20 which means people are probably going to have to fight for these bad boys! (We’re already sharpening our elbows!) But because we love our bakers so much, they get first refusal to buy one and that first purchasing opportunity is going to happen at our Christmas social. Can you wait that long?! Oooo ooo, we can’t!

Report back here at the end of the month for a photo of our committee in their pinnies, but first a couple of whoop, whoop, hands in the air, shout outs to two companies who made the aprons possible: Bernstein and Banleys Ltd who kindly donated the cloth and Print Club London in Dalston who were superstars and printed our logo on the cloth for free. Thank you guys; we mean it when we say these aprons would not have come to fruition without your generosity. And a big kiss to Laura too. If you need a tailor, you know who to call!